Even before the National Football League announced that Dr. Dre, Mary J. Blige, Snoop Dogg, Kendrick Lamar and Eminem would perform during the ­Pepsi-sponsored halftime show at Super Bowl LVI on Feb. 13, Seth Dudowsky knew he had a crucial sound issue to solve. One of his many responsibilities as the point person for the production at SoFi Stadium in Inglewood, Calif., which would be seen by 103.4 million television viewers (and rack up more than 121 million YouTube views), was keeping the set list under wraps. The problem, however, was the venue, which is next door to the NFL’s Los Angeles-area headquarters where he works and is anything but soundproof.

“It’s technically an outdoor stadium with a roof,” Dudowsky says. “So sound blows out the [open] sides of the stadium.”

Knowing that media outfits would station reporters outside the stadium in the days leading up to the game — when halftime show rehearsals would be taking place — Dudowsky, 35, and his team turned SoFi into a 70,000-seat boombox, using its outdoor sound system and strategically placing speakers to blast music outward. “We tested it with Van Halen. We tested it with Parliament Funkadelic,” Dudowsky says. Secrecy was maintained, although he adds, “There were news stories about how the neighborhood was sick of hearing Bon Jovi every night.”

That kind of proactive problem-solving, along with a United Nations-level talent for diplomacy, led the NFL to appoint Dudowsky as its first head of music in April, making the South Orange, N.J., native the league’s go-to executive for all music-related business and its liaison with Roc Nation, the NFL’s official Live Music Entertainment Strategists since 2019.

Dudowsky, who came to the league in 2013 as a coordinator on the NFL Network’s programming team from ESPN, where he was associate manager of international programming, talked to Billboard about the scope of his responsibilities, the NFL’s perspective on remunerating its Super Bowl halftime performers and the white-knuckle logistics involved in putting on the big show (which, by the way, will have new sponsorship next year). 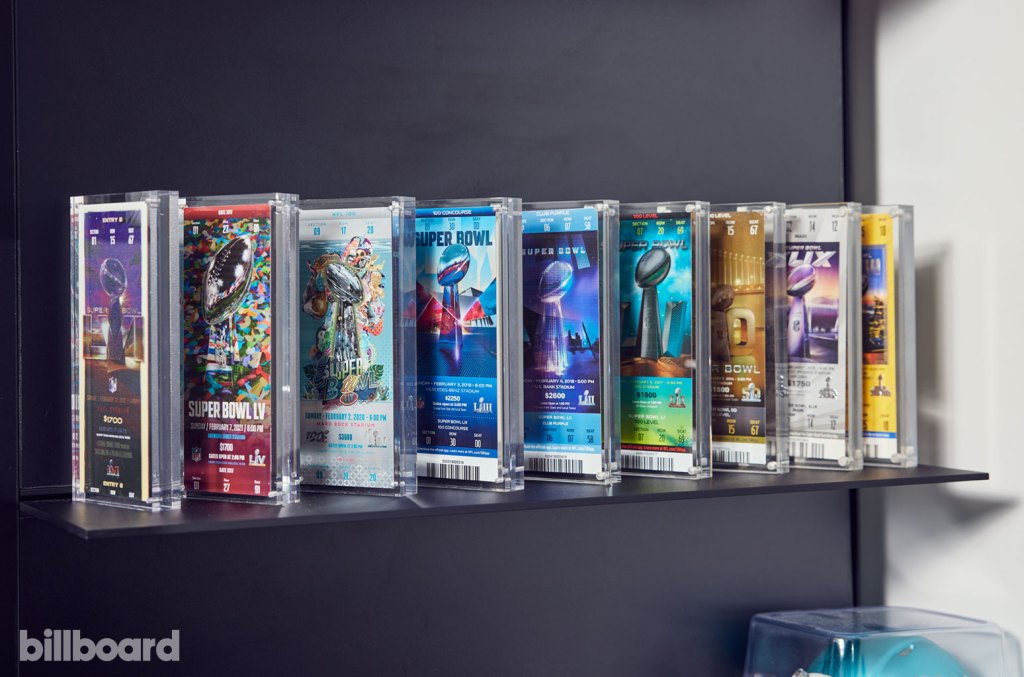 “These are tickets to each of the Super Bowls that I have worked,” says Dudowsky. “Each one holds special meaning for me.” At his first, in 2014, Dudowsky made good on a promise to take his father five years after beginning his career. “It was a terrible game. The Seahawks destroyed the Broncos 48 to 6,” he says. “And it was three of the greatest hours of my life.”

You are the NFL’s first head of music. Why was the job created?

For years, one of the prevailing feelings from the music community is that whenever they had an idea or wanted to pursue an opportunity with the NFL, they never quite knew who to reach out to. It was unwieldy, even internally, to know who the stakeholder was on what ­property. So, a number of people here thought it would be a lot easier if we had a one stop for music, especially as music has grown in importance in terms of the league’s overall strategy, and our broadcast and sponsor partners.

How many music-related activations do you handle?

I oversee all of the music performances at league-controlled events; mainly [the season] kickoff, international games, Super Bowl entertainment and the draft. And each one of those involves multiple music acts. For instance, J Balvin is headlining the season kickoff concert, and we’ll do a private show the night before and have other music entertainment in the lead-up to it. And Super Bowl week is not just the halftime show. It’s the national anthem, it’s “America, The Beautiful,” “Lift Every Voice and Sing,” the tailgate before that, the commissioner’s party on Friday night and any of the performances we’re doing during the week. It could be anywhere from 20 to 50 music acts over the course of the year on league events. I also help support the individual teams and their bookings. Each team controls their own home-game experience. But I’m a resource for all 32 clubs if they want to get in touch with an artist, put together a package for an offer or strategizing.

What’s the process of working with Roc Nation on the Super Bowl halftime show?

Jay-Z is as important a voice, if not the most important voice, along with the commissioner and the leaders at the NFL in terms of the decision-making process. [Roc Nation CEO] Desiree Perez guides us on strategy, especially around culture, music and the way the show is produced. And [Roc Nation executive vp of strategic marketing and business development/head of ­communications] Jana ­Fleishman is an essential voice in our strategic decision-making around any interviews or assets created in support of the show. 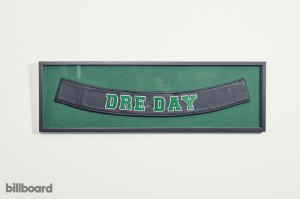 “This sash is from one of Kendrick’s dancers. And to me, it was Dre Day as much as it was Super Bowl LVI. Dr. Dre was the glue that brought those artists together. It’s a reminder of a very special day.”

When the season begins, will you have decided who will perform next year?

I can’t speak to where we are this year, but historically at that time, we are starting to solidify plans with an artist with the goal of announcing in-season who the artist is. We’re already planning the production. I’ve been having meetings in Glendale [Ariz.] for months, and on the NFL event side, years in terms of planning, logistics and operations. Regardless of who the artist is, the production planning has to start before that’s decided. We’re looking at the different elements of the field and the tunnels; rigging; where we’re putting trailers; how many people we can allow on the field. Each stadium is unique, starting with, is the field [artificial] turf or real grass? Does it have a retractable roof, a full roof or is it open-air? We have to think about protecting the show from an audio perspective. And from there we get into the weeds of the creative with artists — what their vision is and how we overlay that onto the building where the game is taking place.

Why does it matter whether it’s turf or real grass?

The single most important thing about Super Bowl Sunday is that we can play a football game on it and that the halftime show does not impact the game in any way. The biggest challenge is the weight on the grass. If it’s compressed too much, the ground becomes too hard, and it becomes unsafe. And there’s really no way to reverse that other than to let the field sit without putting things on it. So, we have a constant discussion with our football operations team and our turf management team about how to limit weight on the field with the set pieces, the number of bodies out there, carts. Every night after we’re done rehearsing, machines are used to scan the field and give us a printout of all the pressure points. It’s essentially a heat map. And then we’re told, “You guys are good to go.” Or, for example, “How can you limit the weight load from the goal line to the 20-yard line?”

Aside from production costs and union scale, the NFL doesn’t pay artists to perform on the halftime special. The NFL is making a lot of money. Why can’t it put some toward the talent attracting viewers?

The most valuable currency that exists in our culture at this point is a captive audience — people’s attention. It’s the hardest thing to capture, no matter who you are. So, the real value that our platforms offer is the promotional value of being up on that stage. In the case of the Super Bowl halftime show, we’re talking hundreds of millions of viewers, in addition to the marketing campaign, the assets that we build and the music that we license. So, when you look at Shakira’s “Whenever, Wherever” becoming a No. 1 song [on the iTunes U.S. chart] almost 20 years after it was released [following her 2020 halftime performance], in terms of value, that’s something that, for a lot of artists, isn’t even quantifiable. Obviously, the Super Bowl halftime show is the most extreme version of that, but last year, 80 of the top 100 broadcasts on television were NFL games. So, when you talk about the unique opportunity for artists, or any content creator or brand, to have exposure, and to be a part of that megaphone of the NFL, to us, that is real value. 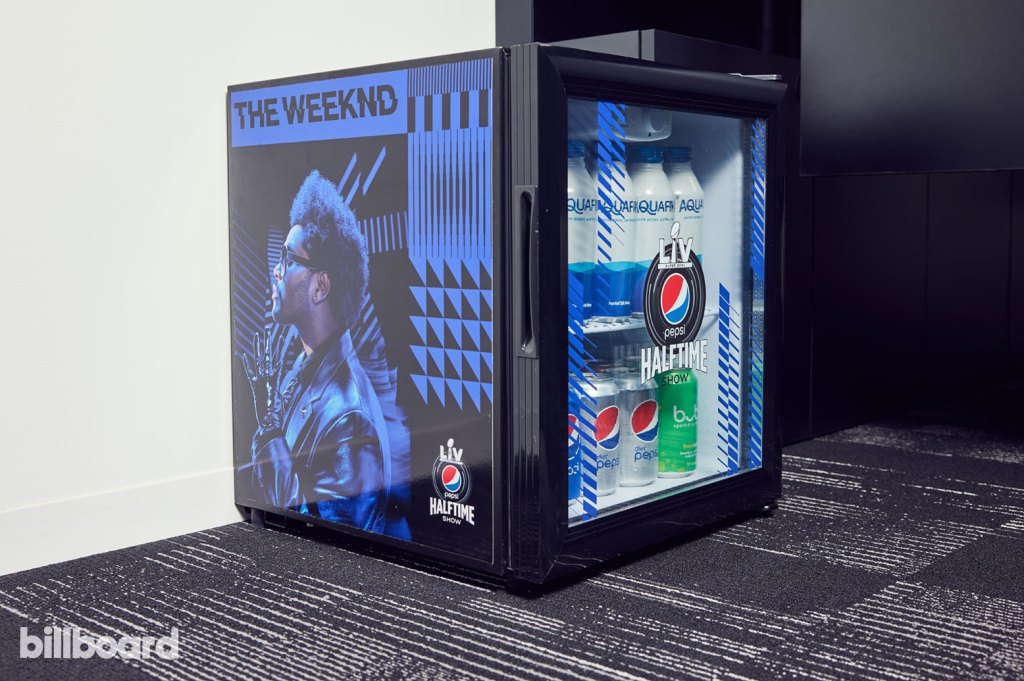 Pepsi custom-made these coolers for the team that produced the 2021 Super Bowl halftime special during the pandemic. Despite working on Zoom, we all got very close,” Dudowsky says. “There were less than 50 made, and I think The Weeknd has between five and 10 of them.”

Are you working on any new initiatives?

From a music licensing standpoint, we are more focused on being culturally relevant for younger audiences. We know how important that is to keep growing our fan base, and that includes our players. Our network plays in every team facility in the league, so the teams are as much of a core viewer as we have. And it’s important to me that players feel like their tastes and their cultures are being represented in the content we’re creating. I want to know what the players are listening to in their headphones before they’re warming up. I want to know if a bunch of players went to a J. Cole concert last night and if artists are bringing players to their shows. Then, are we licensing the music of those artists? Because if the players think an artist is cool, so do our fans, especially our younger fans.

They want to know what the players are listening to.

Some of the most impactful content we have socially is the individual highlights that we cut for the players. We’ll say to a player, “Here are a bunch of music options. You tell us what you want. We’ll clear it and synch it with your highlights.” And then when they post on their socials, it’s authentic for the player to say, “Here are my highlights and also some songs that I like.” 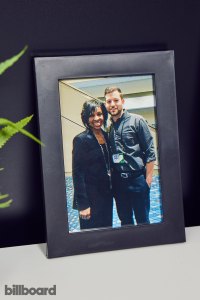 In 2017, Gladys Knight brushed off criticism for singing the national anthem at the Super Bowl in the wake of controversy over players kneeling during games. “Her grace and leadership were an inspiration.”

So, do you tell the players, these are songs we can license, choose from them. Or does the player give you a playlist?

Both. I would love if it we could have them say to us, here’s everybody I’m listening to, but we usually start from the place of we know generally some of the artists and genres that they’re fans of. It’s a dialogue between the players involved in the program, the teams, our social team and our music supervisors.

What music are you listening to these days?

I keep a running playlist, and every day, I add one song to it. The only qualification is that the song is tied to a memory from that day. Inspiration can come from anywhere. It could be a song I overheard on the radio. It could be an artist I booked that day. Maybe it’s a specific lyric that ties to something that happened that day. It could be driven by an algorithm or fate,  overhearing a song in a restaurant, or the song that opens a concert I attend. That playlist is better than a camera roll for me. I call it my song journal. Every one has a specific meaning to me and takes me back through my year. I’ve been doing it for a couple years now. This year’s playlist is almost 15 hours at this point. In a random week, just because I think it speaks to the breadth of my music tastes, I listened to songs by Billie Eilish, Jungle, Rod Wave, The Weeknd, Steely Dan, Warren G, Jhene Aiko, The XX, Mary J. Blige, Outkast, Unknown Mortal Orchestra. I could keep going:.

You’ve been to nine Super Bowls. Are you ever able to enjoy the game?